The single most valuable piece of Berenstain Bears memorabilia is arguably the infamous Berenstain Bears Atari 2600 game made by Coleco in 1983.  It was the first Berenstain Bears video game, and was very nearly the last, due to the disastrous debut of the “Kid Vid” accessories that were required to play the game.

Only two games were made in the “Kid Vid” series, the Berenstain Bears and the “Smurfs Save the Day.”  Both games require a Kid Vid controller and series of audio cassettes that render the game unplayable on just a regular 2600 console.  Needless to say, the games (and the Kid Vid system, in general) were not popular and quickly disappeared from store shelves (note that the the release of the Berenstain Bears games was right at the time of the North American video game crash of 1983).  The Berenstain Bears game is very obscure and copies have sold for $500 or more if found still mint in shrink wrap.  Depending on condition, copies of the game cartridge itself have sell for between $75 and $200 when they (rarely) appear on eBay.  Of course, it’s not only a “must have” for Berenstain Bears collectors, but is also highly sought after by Atari fans — AtariAge rates the game’s rarity as a 9 out of 10, or “extremely rare” and AtariGuide lists it as “ultra rare.”

Educational software was a big focus of the Berenstains during the 1990s and 2000s. Beginning with software titles for PC/MS-DOS operating systems, titles like “Learn About Counting” and “Learn About Letters” were published on 5.25″ and 3.5″ floppy disks.

In the mid-1990s, CD-ROM technology replaced diskettes, with titles like “Learning at Home” and the Berenstain Bears “Treehouse Classroom.”

“Extreme Sports with the Berenstain Bears” was even named on the “20 Worst Video Games Ever Made” by Electronic Gaming Monthly.

And while I’ve never played it, I do have to admit, I don’t really think of the Bear Family as the sort of characters who would have a great interest in or excel at extreme sports (as popularized at the time by the recently-developed X Games).

There are also two software titles not included on the list below, “Learn About Reading” and “Shapes & Numbers,” two pieces of software advertised on Britannica/Compton’s New Media titles “Junior Jigsaw” and “Learning Essentials.”  But after searching for these games since 1998, I still haven’t come across any copies – were they never released? (Or perhaps “Learn about Reading” became “Learn about Letters” or “Learn About ABCs” and “Shapes & Numbers” was incorporated into “Leaning Essentials”?)

Below is a full list of Video Games and Computer Software in my collection.  Also be sure to check out my related post about Berenstain Bears Board Games, Card Games, and Playsets. 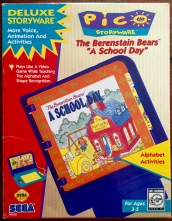