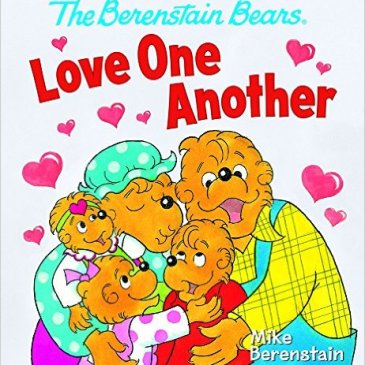 Welcome to the world’s most complete bibliography of the Berenstain Bears book series! This catalog of storybooks, coloring books, and related ephemera has been an ongoing personal project for nearly 20 years. I am also indebted to fellow collector Jeremy Gloff, who has helped immensely in creating and editing this list over many years.

It is my desire to help fans and collectors have a complete and accurate Berenstain Bears book list that is easily accessible at all times.  The list is updated annually to reflect additions to the series (the books are still being published!), as well as occasional corrections or changes to the organizational system. Scroll down for the full list, which is updated frequently.

You can also view/download a printer-friendly PDF version but this is not updated nearly as often:

I hope this list will help you grow your collection and learn more about the Berenstain Bears.  And if you made it this far, you probably should join the “Berenstain Bears Collectors and Fans” group on Facebook. It’s a great way to connect with other fans, ask questions, and show off your favorite treasures.

Thanks for visiting!
–Brad

All storybooks are organized by series/publisher, then by year of publication, and title. For clarity, all titles have been reduced to their distinct/unique nature. For example, “The Berenstain Bears and the Messy Room” is listed simply as “Messy Room.”

Original editions have the book number (“B-28”, for example) printed on the spine; Beginner Books have been widely published in book club editions which are slightly smaller in size and omit this marking. All Beginner Books except one (“That Stump Must Go”) have also been re-issued with updated cover art and/or bearing a “40th Anniversary” logo. Dust Jackets were issued with early books in this series, as noted below.

All reprints of Bright and Early Beginner Books, though these have been edited for content (shortened) and are therefore not identical. All books in this series feature updated cover art, though the interior illustrations are all original.

Though official authorship was credited to Stan and Jan Berenstain, Leo Berenstain wrote the stories and Michael Berenstain illustrated most of the Big Chapter Book series

Titles in the Cub Club book series were not available through traditional book retailers; this was exclusively a mail-order book club. First published by Western/Golden, the series was also published by Readers Digest Kids Books. All books in this series are hardcover, with the Western/Golden editions having a matte finish and the Readers Digest editions are slightly thinner and with glossy covers. Many of the Cub Club books were used as source material for later books that were similar but (in most cases) not identical. (Mike Berenstain, in his series of religious Living Lights books, utilizes these titles extensively in Christian-themed re-writes. As many identifying relationships as possible are noted below.

Dalmatian Board Books (Dalmatian, 2011) [all previously published in Family Time Board Book Series]

The First Time Books series is the best-selling segment of the Berenstain Bears franchise; the series was re-branded as Berenstain Bears Classics beginning in 2018. New editions of these books bear an updated logo and name from the publisher, though they will continue to be organized in this bibliography as First Time Books. The only book whose text and/or illustrations have been changed for is “The Bully,” which received a modest re-write with the issuance of the 2018 edition.

It should be noted that the Berenstain Bears Classics are the best-selling series in the Berenstain franchise; these square (8” x 8”) paperbacks include several titles among the best-selling children’s paperbacks of all time. The following books have each sold over three million titles: New Baby, Messy Room, Go to School, Too Much Junk Food, Meet Santa Bear, Too Much TV, Forget Their Manners, Learn About Strangers, Visit the Dentist, and The Truth). This series and its popularity peaked in the 1980s and early 1990s, the height of the Berenstain Bears franchise. At present time, many of these books continue to be best-sellers amongst the Berenstain canon. Several First Time Books were also adapted into coloring/activity books, including “Go to School” and “Too Much Birthday”, amongst others. See the Coloring/Activity Books Section for more.

NOTE: Several additional titles by Stan and Jan Berenstain were released in this series but do not feature Berenstain Bears. They include

HarperCollins 8×8″ Square Paperback Series [sometimes referred to as “First Time Books”, though this designation is not official. The are, in many ways, the continuation of the First Time Books series, both in terms of physical appearance and content (teaching first time life experiences)]

I Can Read Books (HarperCollins)

Put Me In the Story Personalized Books (PutMeInTheStory.com, 2013)

Sandy Creek Large Hardcover Editions [All previously published in the Harper I Can Read Series; sold exclusively through Barnes & Noble and all issued with dustjackets]

Scholastic/Cartwheel Large Format (Scholastic) [All based on animated television holiday specials from the early 1980s; “Christmas Tree” is often considered to be in this series, though it was published by Random House]

The following is a list of “books” or “book-like” publications that are published in a book or booklet format but don’t contain traditional printed stories. While some collectors may consider some or all of these items as memorabilia, they do justify being listed on this bibliography. All items listed chronologically.

Note: you can view the covers of nearly all Berenstain Bears coloring/activity books by visiting Retro Reprints, the web’s largest coloring book resource